Muxía is a quintessential seafaring town; the majority of its houses are built on top of a sandy tómbolo which was formed between the peninsula and which has its highest point in Mount Corpiño (67 metres), a genuine granite mass located to the north of the town and in Mount Enfesto on the south side. 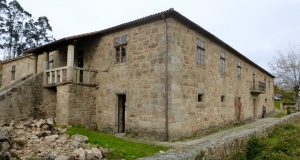 The first houses were situated in the riverbank protected by Mount Corpiño, where the old beach used to be and which today has disappeared due to the construction of the boardwalk and the port. The Cabo da Vila square, as its name indicates, formed the southern end of the urban center.

The Camposa area, at present, totally urbanized, was the plainest area where the few farmlands the inhabitants disposed of, were situated. It is difficult, due to the lack of documentation and historic remains, to know how and when the town of Muxía was founded. Its origin is probably linked to these three factors: Monastery of San Xiao of Moraime, which had a major influence during the Middle Ages over the lands surrounding it; the Sanctuary of Our Lady of A Barca – its story goes hand in hand with the story of Muxía -, and lastly, the Count of Altamira, to whom one of his most closest men, Captain Fernán Álvarez of Carantoña, possessed a country house in the town located in Pena do Pazo. However, we can quote some examples of historic references: 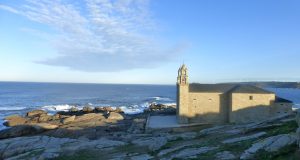 At the beginning of the 19th Century the importance of the Muxían fishing industry already stood out, the most notable of which was the conger eel and sardine captures; by mid-century, the town already had a commercial and service function with regards to the rest of the municipality, and began to stand out significantly in the art of lace-making. 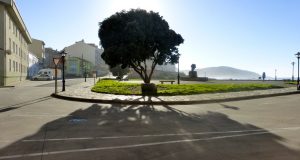 At the beginning of the 20th Century, Muxía was a seafaring town that had little more than one thousand inhabitants. The beach was a place for mooring small vessels that were moved by oars or sails, whilst the Constitución Square was the center of the town where the market was held.

The first communication route Muxía had was the road Muxía-Berdoias, which allowed it to communicate with the capital of the province via the first motor vehicles that appeared in the 1920s and also, at the end of the decade, with the arrival of electricity. 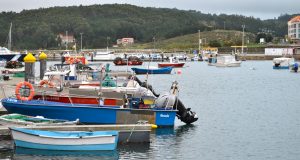 The Civil War and Post-war years were difficult both for cultural as for economic progress, being after the 1950s when this misery starts to disappear due to fish prices. The real economic boom of the town was produced with the discovery of the fishing ground Canto, making the aspect of the town change completely, mainly during the 1970s (complete renovation of the fishing fleet, construction of new houses with brick and cement materials, etc.), though nowadays the importance of the sector has less significance due to the reduction in the amount of captures and species. At present, Muxía is a seafaring town which serves as a shopping and service center for its entire municipal district giving it certain vitality and making it a center of attraction for the inhabitants of the rural area in the municipality.